The usual suspects.  The facts in City Savings were undisputed and not terribly unique.  The case involved a real estate owner/borrower, a lender/mortgagee and a subcontractor/mechanic’s lien holder.  In 2005 and again in 2007, the lender made two construction loans to the owner and contemporaneously filed two mortgages.  The funds from the lender’s mortgage loans were for the specific commercial project that gave rise to the subcontractor’s mechanic’s lien.  In 2008, after failing to get paid, the subcontractor recorded a mechanic’s lien.

The litigation context.  At the trial court level of the City Savings foreclosure case, both the subcontractor and lender claimed their respective lien had priority over the other.  Despite the McComb precedent in favor of the lender, the trial court gave the mechanic’s lien priority based upon laws of equity.  (Black’s Law Dictionary defines “equity” as “justice administered according to fairness as contrasted with the strictly formulated rules of common law.”)  On appeal, after citing to McComb and the three operative statutes (Ind. Code §§ 32-21-4-1(b), 32-28-3-2 and, most importantly, 32-28-3-5(d)), the Court reversed the trial court in favor of the lender.

Unclean hands.  What distinguishes City Savings from McComb is the Court’s analysis of the subcontractor’s equity-based arguments around Section 5(d).  The subcontractor asserted the equitable doctrine of “unclean hands.”  In Indiana, that doctrine “provides that one who seeks relief in a court of equity – [foreclosure actions are essentially equitable in nature] – must be free of wrongdoing in the matter before the court.”  The subcontractor, Eby, contended:

[Lender] supplied the [owner] with proceeds from a third promissory note to pay a subcontractor, Vendramini, for its improvements to the Real Estate knowing full well that Eby remained unpaid by the [owner] for Eby’s improvements.  The payments to Vendramini occurred after Eby had already recorded its mechanic’s lien and after Eby had filed its complaint to foreclose to which [lender] was made a party.  The trial court frowned upon the fact that [lender] “essentially authorized the payment of a third contractor before the second contractor.”  As [lender] was on notice of Eby’s mechanic’s lien before it disbursed those funds on behalf of the [owner], the trial court concluded that [lender] was in the best position to avoid a loss in this case.

The Real Estate was clearly encumbered by [lender’s] first recorded mortgage at the time Eby contracted with the [owner] to provide improvements.  Eby knew that the Real Estate was commercial property, that it was encumbered by a mortgage, and that the loans secured by the mortgage were for the specific construction project that gave rise to Eby’s mechanic’s lien.  Eby was in the best position to avoid a loss because, at the time of contracting, Eby knew exactly what kind of lien it would be getting regarding its improvements to the Real Estate:  an inferior one.

A separate equitable doctrine in Indiana provides that “equity follows the law.”  In City Savings, principles of equity could not overcome the clear application of the statutory law in favor of the lender.  There was no evidence that substantial justice could not be accomplished by following the law.  Since Indiana’s priority statutes governed the parties’ actions, “equity must follow the law.”

This follows up my earlier post Property Owner May Dodge Tax Sale Bullet dealing with Marion County Auditor v. Sawmill Creek and tax sales, specifically the notice requirements surrounding petitions for tax deeds.  The Indiana Supreme Court, in an opinion filed on March 21, 2012, reversed the lower courts’ decisions and denied an owner’s motion to set aside a tax deed, which divested the owner of title to its property. Why does this blog address tax sales?  Tax sales wipe out mortgage liens.

Constitutional law.  In Indiana, when an owner of real estate fails to pay real estate taxes, the real estate may be subject to sale in settlement of the delinquent taxes.  Such action by the government, however, conflicts with the rights of property owners.  The Sawmill opinion explains that the Constitution, specifically the Due Process Clause of the Fourteenth Amendment, dictates how the government may take property and sell it for unpaid taxes.  Generally, the law requires the government to provide the owner with notice and an opportunity for hearing “appropriate to the nature of the case.”

Different test.  It was undisputed in Sawmill that the Auditor complied with the notice statutes in effect in Indiana at the time.  The owner’s position was that the notice scheme did not pass the standard set by the U.S. Supreme Court in Jones v. Flowers.  The Court of Appeals hung its hat on Jones.  The Indiana Supreme Court’s opinion rested instead on a different U.S. Supreme Court case, Mullane v. Cent. Hanover Bank, from 1950.  The Mullane test is slightly different than Jones and permits courts to look more broadly at all the circumstances.  The Indiana Supreme Court said:

The Auditor was presented with a situation in which the Property was unimproved, bare land, and the owner could not be found.  The notices mailed to the address provided by [the owner] were returned with no information as to a new forwarding address.  And a search of the chain of title, the records of the Indiana Secretary of State, and the phonebook could not locate a new or alternative address.  In fact, the search returned no results, other than the Property, for [a differently-spelled owner].  [A title company] thus provided the Auditor with the known addresses for the previous owner of record.  Concluding that [the owner] may have existed in name only for the purpose of holding the Property for [the previous owner], the Auditor then sent notice to [the previous owner] as well as continuing the attempt to send notice to [the owner].

The owner’s position.  The owner did not quarrel with the facts, nor did it dispute that the Auditor followed Indiana’s statutory notice scheme in place at the time.  (The subject statutes have since been changed as it relates to various notice requirements.)  Instead, the owner contended:  “the only reasonable step was to post notice on the [subject property].”

Negated.  While putting a sign on the real estate may seem sensible, the Indiana Supreme Court rejected the owner’s argument.  Under the circumstances in Sawmill, due process did not require the government to do more than it did.  There was evidence that notices for approximately 1,800 properties were returned as undeliverable to the Auditor in 2005 alone and that the notice posting argued for by the owner was cost-prohibitive.  The Court felt that the burden of posting notice on that many properties, particularly in a county as populated as Marion, was significant.  The Indiana Supreme Court therefore took a pragmatic approach (and issued a pro-government ruling).  In the end, the break given to the owner at the trial court and Court of Appeals levels was not given by the Indiana Supreme Court.

Beware.  This is another in a series of posts crying out to lenders/mortgagees to be cognizant of the status of the real estate taxes on real estate collateral.  Best practices dictate policies and procedures for monitoring tax payments, assuming of course that real estate taxes are not escrowed.  Mortgagees can and do receive some pre-sale notice in Indiana, but not always.  Don’t rely solely on counties or mortgagors to keep you up to speed on such an important part of your business.

Please Forgive The Delay - New Posts To Resume Next Week

With the Thanksgiving holiday, the press of my day job and a trip to Georgia last week for my dad's 70th birthday, I have been unable to post anything of late.  I apologize.

After over 300 posts and 6+ years of purely business-related features, I thought I'd take a moment to post something personal and recognize my dad, pictured below on the left, who turned 70 in October.  Dad is a retired attorney from Washington, Indiana, where I grew up, and is very dear to me.  My little brother Matt, pictured on the right - with me in between - had the privilege of playing Augusta National this past Wednesday.  Matt, who works in the golf industry in Atlanta, was able to get us on the course through his contact, Danny Yates, pictured in the center.

For those who may be a fans of The Masters, you'll recognize #12 green in the background, as we stand on Hogan Bridge over Rae's Creek.  My dad, a life-long average golfer at best, birdied this hole.  Needless to say, it was a special day.  Kudos to Matt and Mr. Yates for making this dream come true.

Happy holidays, and thanks to all who read my blog.  Back to work next week..... 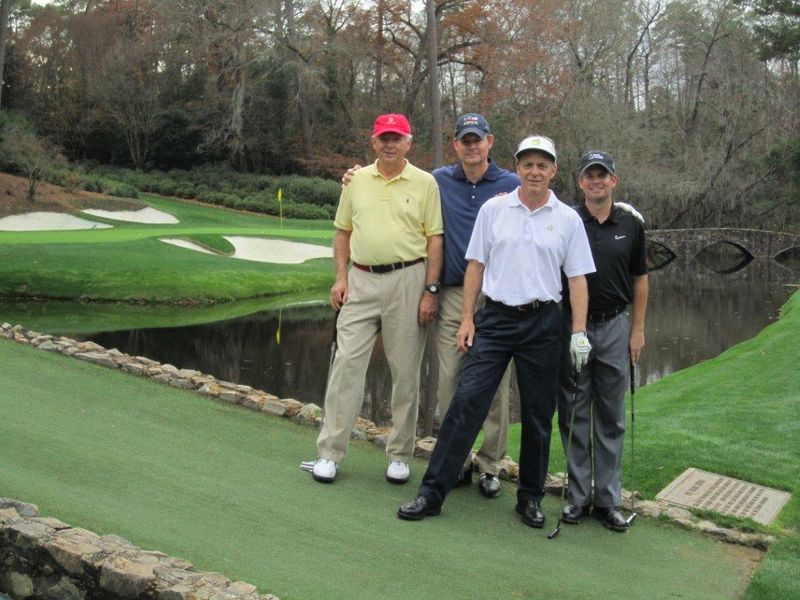